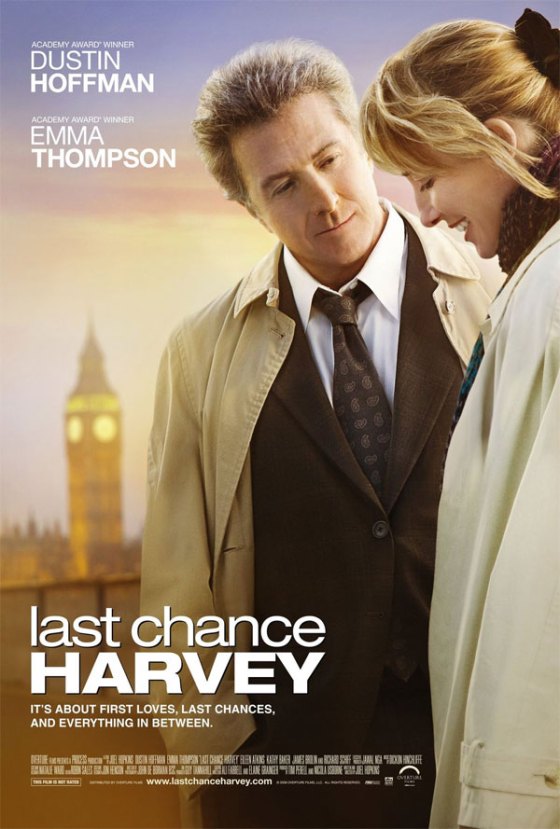 If you’ve read this blog before, then you know that we love to promote movies that portray wholesome family values, healthy family relationships and characters with moral fiber.

On a little outing this evening, my Mom, my hubby and I went to see Last Chance Harvey. Watch the trailer here if you haven’t heard about it yet. ***Come back to this post if you plan to see the movie and don’t want any info yet 🙂

Although the movie starts out a little rocky (aka depressing) for the main characters Harvey ( a divorce’) and his friend Kate (never married), it gets better, and I love a good love story with a happy ending. Since starting this blog and zeroing in on the great marriage debate, I seem to notice more now when movies have healthy family values and when they don’t.

Dustin Hoffman is on the verge of loosing his job. He goes to London for his only daughter’s wedding and finds out that she has asked her step-father to walk her down the isle. Down and out, and heartbroken, Hoffman attends the ceremony, but then makes a quick exit for the airport to get back to NY for a business meeting, when he finds out he’s been fired and meets Emma at the airport.

Not to spoil the plot, but I want to point out what I loved about this movie:

There are a lot of great things in this movie; kind of surprising, and very refreshing coming from Hollywood. This movie is a rare gem in what is usually a sea of filth.