Quiero compartir esto con todos mis amigos ilegales. If you don’t quite understand, than maybe you shouldn’t check out Obama’s new service website. It’s quite confusing in oh so many ways.

We are excited to announce the launch of Servir.gov – the Spanish-language companion to Serve.gov. As the nation celebrates Hispanic Heritage Month, this new website will make it easier for Spanish-speakers to find or organize volunteer projects in their communities.

Just what we need, a Spanish version of ACORN, and Obama telling them how to volunteer aka organize! I have to say that it’s amazing that I came out of the Liberal California State University system with a degree in Political Science, unscathed! But in all of my polic sci classes I never once had a lecture on community organizing. In fact, I had never even heard of it until Obama came on the scene. Now we have ACORN. My eyes are wide open! Thanks Glenn!

You’ve got that right! A dot gov website all in Spanish! Are they serious with this? I can not believe that the President is confused about exactly what language we speak in this country…. I’m sure he’s not confused, but he definitely likes to cater to illegal immigrants, give them our money and free health care, while the hardworking and responsible Americans foot the bill for all of it.

I have to admit, I don’t mind them being here. I just think that if they work, they should pay taxes like everyone else. And if they aren’t legal, the government shouldn’t be footing their bill. Living in S. California it’s nice to have someone to clean my house and keep up the yard and help me flip my houses for a really cheap price, and most illegal immigrants that I have  met are really sweet, but I also don’t think that my tax dollars need to go to individuals who broke the law and came to this country illegally. If they’re here illegally, and don’t pay taxes, then they should not benefit from those of us who do put money into the system…I mean, that have our money stolen from us by the government and put into the system.

I believe, as I do about all political things, that the government needs to stick to the writings of the Constitution and that government should be limited. Our governments, state and federal need to stay out of the babysitting-illegal-immigrants business. If health care is going to be provided to non-tax paying individuals, then we need to let capitalism take over. Free health care and other social programs need to come from private charity organizations. They can open and run and fund free clinics and if you don’t

have insurance, and if you’re here illegally, and you get sick, you can seek medical care from a private run and funded facility. I’m not saying we shouldn’t be charitable, I’m just saying that the organizations that my money goes to should be MY choice, NOT Obama’s.Those who believe in giving illegal immigrants heath care and other services, should be able to donate their money to those causes. Everyone should not have money stolen for the causes that line the pockets of the politicians friends and eventually their own pockets as well.

What’s wrong with that? Here is my theory, and that of my family: Obama is a communist dictator in disguise right? Yes! So, in order to have us all under the government’s control, they need more people dependent upon them. How do they make us dependent? Make us broke, jobless, and taxed to death and utilizing their social programs.

Because we are taxed to death, we have little discretionary income, and thus less and less of our personal money is being given to charity organizations, the exact same organizations that would be providing free health care to the poor and illegal immigrants. Since non-profit and charity organizations aren’t receiving as much in donations as they could or possibly have in the past, that leaves only one organization to provide these services….the government, how convenient huh? They provide these services with stolen money, money they stole from us. See, the government wants to have their hands in all of these pots, have control over everything, and they are forcing us to pay for it, all the while they reduce our freedoms and increase our dependency on them.

Don’t you think that if you want to give your money to a non-profit/charity illegal immigrant health care facility, that should be your choice? Yeah, it should, but it isn’t because the President of the United States is stealing our money and forcing us to pay for all of these ridiculous, unnecessary and debilitating social programs.

Billions of dollars are Western Union-ed and bank transferred to Mexico each year. That money is not staying here, it is not being taxed, and yet they use our social services, our education system, our health care and crowd up our jails, and in fact are being encouraged to do so by our own government {well, maybe not the jail part}.

The money immigrants send back to their own country is called “remittances.” The following information is provided on the US Immigration Support‘s website.

Last year Mexico received more than $17 billion in remittances. The amount of remittances in Mexico exceeds the amount of foreign direct investment in the country.

The majority of the remittances are sent using money transfer companies, but now commercial banks are introducing similar programs which are gaining popularity. Banks like Citibank have started forming partnerships with foreign banks. They have also made it easier for immigrants to open bank accounts by presenting a consulate identification card. At Citibank a remittance of up to $3,000 can be sent for $5 which is significantly lower than what money transfer companies are charging. Bank of America has also introduced a similar program called SafeSend. With this program, remittances can be sent to Mexico at no cost. Customers can transfer money from their checking account and within a few hours the funds are available for pick up in Mexico. Another option is to transfer money to an account of one of Bank of America’s partner banks in Mexico and the funds are available the following day. The customer can simply make a phone call to the bank and request the remittance to be sent. In the process of introducing such programs many banks are hoping to gain new immigrant customers who currently have no bank accounts in the United States. The banks are offering perks like giving out international phone cards or financial education classes to attract immigrants. Other financial institutions like the Federal Reserve also would like to see a greater number of immigrants opening bank accounts so that they can take advantage of services offered by banks and start establishing accounts.

However, one barrier that immigrants often face is that some banks require a Social Security number in order to open a banking account.

No worries there, thanks to Wells Fargo {as reported here}:

It began with Wells Fargo working closely with the Mexican government. But 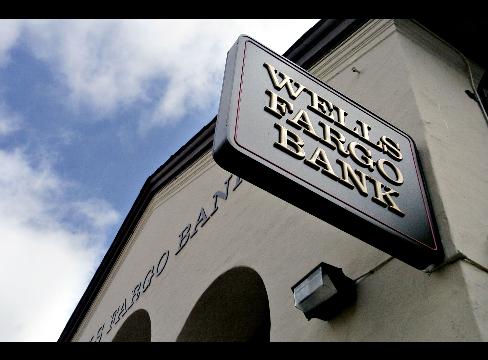 But it is clear the U.S. government is, in fact, making it easier to break U.S. immigration laws. Despite the protests of the IRS and anti-terrorism agencies, the Department of Treasury last year allowed banks to accept the matricula consular and to use tax I.D. numbers to open accounts for illegal aliens.

The Federal Deposit Insurance Corporation [FDIC] is encouraging banks to sign up illegal aliens in the banking system, calling the growth of the market “a compelling incentive for U.S. banks to enter this largely untapped market.” And the FDIC program demonstrates that unbanked Latin American immigrants can be brought into the financial mainstream.

If the $17 Billion that illegal immigrants send to Mexico each year was taxed by our government, perhaps these people could start contributing to all of the social services they use. It’s pretty clear that they want illegal immigrants involved in US banking system, so clearly there is a way to track and tax most of that money. The government even has a website for immigration support. I can’t get an SBA Loan, but I could get more help and support if I was an illegal alien, sneaking into this country, breaking the law,using a Mexican ID card to get a bank account and then usurping American social services. Nice! So basically our current government leaders are an “Obamination” and treat the free-loader illegal immigrants better then they do real Americans.

Questions and comments welcome! Tell us what you think!

3 thoughts on “Habla Espanol? No problemo, Obama has created a website just for you…”